With a fairly decent wintery forecast for the weekend Romain and I headed off on thursday night for a long weekend of climbing / biking fun.

First up we headed over to Cairngorm to Corrie an t-sneachda, where we decided to break our selves back in to the winter climbing groove with an ascent of Fingers Ridge. Conditions weren't ideal as it turned out with unconsolidated snow on black rock. this lead to very timeconsuming clearing as we searched for gear and placements - though plenty were forthcoming. After a very long time on the route (c.7hrs!!!!) we topped out to a nice (by cairngorm's standards) day on the plateau with only moderate wind and even the occasional glimpse of something other than cloud to be had.

A reward of a fish supper saw us on the way to Torlundy and the Northface carpark, though not before we managed to drive off with the van side door open, DOH!! Still, a comfortable nights sleep in the carpark and we were up at 4 to head off up Ben Nevis for route number 2.

A reasonable amount of snow was lying so we headed up towards tower ridge, and arrived as the 1st team of the day were setting off up the starting chimney. Luckily for us they wandered off route soon after and we managed to skip past them before the little tower. A brief pause at the little tower for food and water saw us joined by the two teams following us. One of whom shot off into the distance ahead of us never to be seen again, and the other who decided they'd like to follow someone who new the route (plus were busy rolling up for a quick fag break). We continue up to the great tower where we found the eastern traverse to be in good nick with solid neve - though I did find it a little un-nerving tip-toeing along! The drop down into the tower gap has not been improved by the blocks which fell away earlier in the year - and all parties seemed to be making use of the insitu slings to get down safely. the climb back out was a couple of great moves, well lead by Romain, before easy ground took us to the plateau. suspiciously, Tower Ridge also took us 7hrs to complete, largely due to a fair amount of powder lower down ontop of the decent consolidated snow. As we climbed though, the snow quality just got better and better and pas nigh on perfect by the top.

A quick descent down no.4 gully to the CIC and were were back at the van, knackered for about 6pm.

After our days efforts a Pasta Carbonara was consumed in the van, followed by a swift trip to the Ben Nevis Inn for a sly half of Cairngorm Callie. Sunday was our recovery day and spend eating breakfast in Nevis Sport before driving back to Aberdeen.

Monday (the last day of freedom) saw us heading to Ballater for a few hours mountain biking. we headed north from the pass of ballater, over to Morven Lodge, the hill behind and then down to the east side of Glengairn and hence back to Ballater. A lovely area of the cairngorms and very scenic in the wintery weather. The bikes coped admirably with the snow and ice, with only a few emergency bailing moments - esp suprising given I've not gotten round to changing my road orienteered tyres off offroad ones yet! A cracking few hours all in though.

The 2012 Burns Meet saw a somewhat under-quota party of Ann, John, Denis, Robert, Jillian, Linda and Morna head off to the Raeburn Hut near Dalwhinnie (for the first time since 2004, surprisingly). Given the “lively” weather forecast we were prepared for some fun on the hills on the Saturday. What we weren’t prepared for was the sight that greeted us on the Friday night. Denis, despite arriving in the light, had managed to get his van off the side of the track and embedded axle-deep in gloopy mud. No amount of mud splattered pushing and clutch burning would shift it so we just had to wait until the AA Landrover did the job in seconds.
Saturday morning brought heavy hail and snow showers accompanied by gales. This wasn’t enough to deter some: Morna and Linda headed off to the Northern Corries for some ski testing while Jillian took Robert on a bagging trip to Beinn a Clachair. Ann and John had an unplanned long lie in and ended up on the wee Marylin west of the hut. The weather on that was quite foul enough so we were surprised to get back and find the others obviously going through with their plans (except for Denis, who had a van day).

The ski party were doing well in the conditions until the Ptarmigan café materialised out of the blizzard and the temptation of frothy coffee curtailed their adventure. They then skied, with some difficulty, into the wind back down again. Meanwhile R&J, who had somehow managed to stay on their feet long enough to summit, began the walk out only for Jillian to realise that she had already done the hill. Robert’s comments are not recorded.
A fine Burns Supper finished us off and there was widespread apathy on a sleety windy Sunday. Even our keen skiers could muster enthusiasm only for a bit of piste action at the Lecht.
Posted by John at 2:01 PM No comments:

With a cracking Sunday forecast Romain and I headed out for a blast on the mountain bikes. Starting at Crathes carpark, we headed up through Balmoral towards the lochnagar coll. The temps were on the brass monkey end of the scale low down and substantially warmer feeling by the point the track up to the meikle col breaks away from the main landy track. 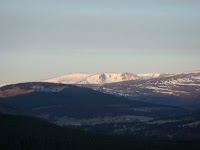 We got great views of the main corrie on the way up, which was depressingly black over the buttresses, but looked like Raeburns and Black spout might be complete. Very little else though! 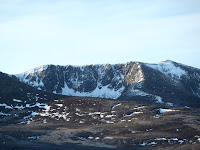 Lochnagar
Anyway, despite quite a few icy sections, the hurl down the landy track to glenmuick was as good as we'd hoped walking off in the past - we even successfully degotiated the burn with dry feet!

From Glenmuick we headed up the capel mounth over towards Glen Clova - the drag up the hill was as painful as always, but the descent well worth the effort. Slightly icy for the descent so we had to pushed sections (well this was our excuse). Clova was lovely in the winter sunshine, though unforunately the ice on the track up Bachnagairn 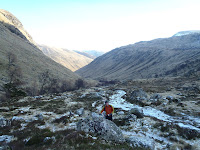 The track back down was a little icy, but not bad and the zigzags fairly fun if a little dicer than usual. 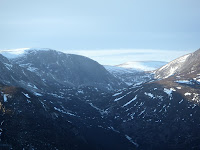 Dubh Loch
Our chosen route back was picked as having the minimum uphill. Luckily this was possibly the best landrover track in the cairngorms, well built and virtually no uphill! Even better, it ends at a distillery!!

Stu
Posted by StuDoig at 6:25 PM No comments:

Belated First Hill of the Year

After failing to find a suitable Hangover Hill on the New Year meet, Ann and John broke their 2012 duck with an ascent of Lochnagar on Sunday. The route was from (where it was a seasonal minus 7), onto Carn an t-Sagairt Beag, Lochnagar, North Top, then down by the Prince’s Stone and through . It was a fine sunny day with a moderate but biting wind over the tops. Most of the hills to the S and W were in the clag but the main 'Gorms were out in the sun too.

A standardly wet and wild new year beconed us up to the NTS bunk house at Morvich, Kintail. With the depressing knowledge that the dire forecast we had was to be the best weather of the meet we set out up the 5 sisters.

the day actually started nicely heading up a stalkers path to the first summit. By the time we reached the first summit, the weather had turned and was throughly miserable with driving wind and rain. The wiser amongst the party headed down for a long wait in the car for the return of the less wise who continued on.

After a long haul up and over to Sgurr Fhurarn, we dropped back down direcly towards shiel bridge rather than continue along the ridge. As we got lower and dropped out of the cloud we wondered when we'd spot the bridge marked on the map..........
Unfortunately, by the time we'd reached the river we'd realised that there was no bridge anymore. A bog trot and a kilometer later and we were at the second bridge marked on the map, only to find...... 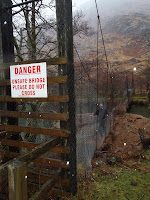 Unfortunately the tempting sight of the car on the far side of the river convinced us to go for the amusing crossing rather than treking down to sheil bridge. 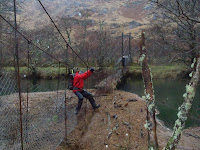 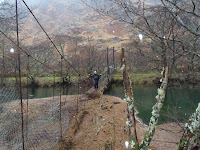 After a fine meal curtosy of Malcolm and Susan, we had a great night seeing in the bells.

The next day was spent wandering through the Glen Elg brochs and then up to a nice wee bothy while recovering from the previous nights exertions.

The last day of the meet saw us heading up "hangover hill" of Sgurr Airgead as its otherwise known. "only" a corbet, but a fair haul up from sea level! The forecast was awful, but the day was actually pretty pleasant even having sunshine on the summit! 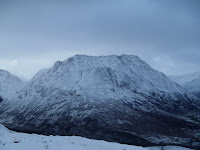 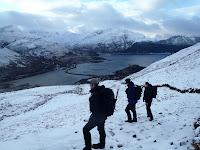 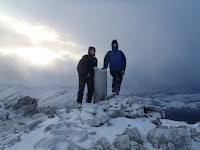 Stu
Posted by StuDoig at 6:01 PM No comments:

OK, not the whole meet but the first contribution, this one from Steve W of his solo trip to bag Saileag on 2nd Jan. Only photos but it gives a flavour of the hill conditions for most of the meet.
﻿ ﻿
Posted by John at 1:58 PM No comments: