Last weekend Ann and John headed off to the Celtic Connections Big Top Festival on Skye, accompanied by old friend Fit Simon who was over from Dublin. In addition to two nights of excellent music (but terrible beer – why do they do that?), we were lucky enough to get superb weather and two great days out on classic ridge routes.
First up was the traverse of Clach Glas and Blaven. The last time we had done this was in the damp and memories were not good, but the day was perfect; hot and sunny. We started off up Sgurr nan Each, just to get better views and add a bit more scrambling into the day. Having not done anything on rock for some time it was also a useful warm up for body and head, and a reminder of just how grippy gabbro can be. The ascent is fairly straightforward and we made the summit for perfectly-timed elevenses.

Then onto the main course. The ascent of Clach Glas went surprisingly well, despite having forgotten the guide book. It was every bit as impressive as we remembered and the final wall is just sensational with the combination of exposure but great holds. First lunch was well-earned.

The descent brought the first of the day’s problems as I got to the base of The Impostor to find a big section missing due to a recent rockfall. Although we later saw people downclimbing this I found a way around the side. Passing the base and seeing how precariously balanced some blocks were it seemed like a good call.
During the rest of the descent we enjoyed the amazing rock scenery that the relatively easy route winds it way through, until we got to the last bump on the ridge. The worn route seemed to venture into some very steep and decidedly technical ground and, feeling a bit confused, we were pleased to be caught up by a bunch of friendly Glaswegians with a guide book. Unfortunately it was the climbing guide and not much use at all, but we had some enjoyable banter that was to be repeated at every tricky bit for the rest of the route. Using our initiative we cast around a bit before we discovered the actual and very easy way around the side. That got us to the ridiculously-named putting green and the start of the ascent of Blaven. This begins with the “4m wall”, which was as tricky as ever and wasn’t helped by the water seeping down the centre. After that we were more or less there, except for the big chimney pitch which saves its hardest move for the end, when you are all out of options. Nice. A short walk to the summit brought second lunch. Although I’ve been up there twice before, both times as last Munros and accompanied by plentiful Talisker, this was the first time with a long sit in warm sunshine.
On the descent I was regretting the absence of Talisker as I think that must be the reason I had no recollection of how unpleasant it is, but it didn’t last too long and we were soon at the car and heading back to the Festival for more tunes.


The combination of two great but late nights at the Festival, the previous day’s excursion and the clocks springing forward meant that we were a bit jaded come Sunday morning. Luckily Fit Simon lived up to his name and kicked us into action, although we thought it prudent to change the route selection from Pinnacle Ridge on Gillean to the Forcan Ridge on the Saddle. While this was vastly easier than the last outing, it was no less enjoyable and fitted the bill perfectly, with great situations and nothing at all serious (except for a group of Edinburgh students, who were far too serious for their own good). The only downside was that winter soft-shell trousers are not ideal wear for a day that set a new March temperature record, but all-in-all a genuine 5-star weekend and worth missing the Club’s Dinner Meet for.

Email ThisBlogThis!Share to TwitterShare to FacebookShare to Pinterest
Labels: music, scrambling
The AMC held its annual dinner meet at the Port a’ Bhaige campsite and An Fuaran bar in Achiltibuie last weekend. The forecast of glorious spring sun, little wind and it still being a little early for the Midgies seemed popular with a good turnout of 17.

Saturday was a little overcast to start, and extended campsite loitering waiting for the promised burn off didn’t achieve much, so the group split into 3 with the bulk heading up Ben Mor Coigach, 6 of us heading north to the Reiff seacliffs and an advance party of 1 heading to Stac Pollaidh to scout it out for the rest of us the following day.
The Ben Mor Coigach party reported a glorious day on the tops – warm sun, no wind, great (if a little hazy views) and a find day was had by all. I'm sure a posting or two from the party will appear soon with details of their day!

At Reiff the party split into two threes (the logical division for 6 climbers......) with one lot heading to the short but sunny routes at the Pinnacle Area, and the second lot opting for the longer but north facing routes of the Black Cliff.
A relaxed morning of cragging in the sun lead to a lazy lunch when we met up again over at the black cliff. The Pinnacle lot headed further north to the pooh cliffs in the afternoon shamelessly chasing the sunshine, while the Black cliff party headed over to the pinnacle area to finish off their day.
The parties met back up at the Pinnacle area just in time for us to all pull out cameras for the last couple of folk to finish climbing – nothing like an audience to put you at ease afterall! 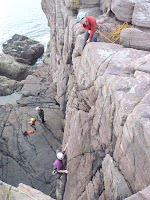 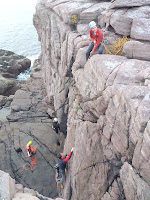 The meal in An Fuaran was good, and the staff friendly – the wine and ale and craic flowing freely through the night.
Sunday was the sunnier day, though we were caught out by the clocks sneaking forward in the night! This lead to a bit of a panic as we realised 0830 was actually 0930 and we should be on the hill or at least finished breakfast!
The meet broke up as per cars with two parties heading for Cul Beag, one walking party on Stac Pollaidh and a second climbing party there also. 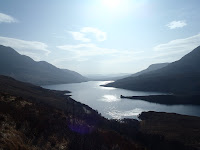 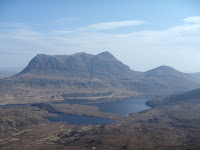 Views From Stac Pollaidh
Another lot headed to the western Fannichs while their kindly taxi driver spend the day cragging near Gairloch before picking them up for the long trip back to Aberdeen.
A successful start to the spring / summer meets – fingers crossed we get a few more like it!
Posted by StuDoig at 9:07 AM No comments:

Last weekend saw John and Ann in the deep South West for a reunion with the old Uni crowd at Suie Lodge Hotel, near Crianlarich. A foul forecast for Saturday seemed fairly accurate with low cloud and steady rain through the very generous breakfast. However, the bagging urge was strong and off we set for Beinn Bhuidhe at the head of Loch Fyne. I was as surprised as anyone when my bluster about “driving through the weather” came true and the rain stopped just as we parked.
The walk itself was more interesting than I remembered and I actually quite enjoyed it, despite having not been looking forward to re-doing this one. We got views from the top and the first shower didn’t really get us until we were most of the way back down again.

Sunday too was on forecast – clear and sunny with wintry showers hanging around. Pretty much the whole gang decided to do the same hill, Ben Vane above Loch Lomond. A short walk-in on a track gave way to a brutally steep but not too long ascent of the East Ridge, broken only by elevenses in a well-placed cave.
Things got interesting near the top where we were reacquainted with winter and met two walkers who turned back due to not having any winter kit with them. It wasn’t as bad as it looked and the weather cleared up to give some great views from the summit. Then it was down the West Ridge to make a bit more of a day of it and avoid the steepness of the ascent route.

Tis the season for AMC birthday trips so on the w/e sat 25th Feb a small party AMCers headed off to Faindouran Bothy to belatedly see in my 30th Birthday. We split into two parties, the advance guard who cycled in from Tomintoul and the gluttons for punishment who elected to walk in over Beinn a' Bhuird from Linn of Quioch.

The walk over was pretty fair (if windy on top) compared to the forecast, with views even from the summit (mainly veiws of hail sweeping towards us in fairness, but views non the less!). Trudging down to the north, the one and only major squall of the day left us a wee bit damp but happy we could now see the bothy. We were less happy knowing that we would have to deflect to the east to the nearest bridge, neatly taking us directly away from the bothy. After a bit of bridge finding anxiety, we were happy to clip clop over a relative stable and sound bridge and along the final few kms of Landy track to the bothy. We arrived with perfect timing as the advance party had just brewed up so cups of jaeuger tea were liberally distributed, drunk and re-filled for round two!

After a general bothy potter fetching water, lighting candles etc we got dinner and the fire going. Luckily we'd carried in plenty of coal for our nights stay and a backup heat source consisting of whisky, rum and port!

Juliette even managed a fine birthday treat by carrying in a huge tupperware box of home baked cakes for us all to share!! Fantastic!

Mini Sparklers and party poppers came next, and a fine (if now singed) happy birthday sign had been huing above the fire for that proper party atmosphere!

The next day and after a leisurely breakfast and start we headed up towards the fords of ann hoping the stepping stones would be above the water. They weren't. We did use the chance to have a look at the new an improved Fords of Ann Refuge though and a good job has been done. We found a comic warning on the inside of the door (don't close it too tightly in cold damp weather) that a previous occupant had been there for a couple of hours trying to get the door open from the inside!

A quick hop/wade and we were on our way over the larig laoigh to derry, and after a sandwich stop in bob scotts, to the car we'd left at Linn o'dee.

A cracking night away - and many thanks to everyone who came along and made it a fine memorable night!

Stu
Posted by StuDoig at 7:14 PM No comments: