A plan for a cycle trip from Aberdeen to Turriff and back was hatched at New Year.  We wanted to avoid main roads as far as possible so the trip was to use the Buchan Railway track as far as possible on the way there and come back via Inverurie on the back roads.

Despite a rather unpromising weather forecast and a murky morning, a group of 9 AMCers gathered at Dyce Station on Saturday to start the Buchan Railway Line.   First port of call was Ellon for regrouping and refreshment.    Beers for some and lunch for others. We split up into two groups with speedier cyclists heading to New Deer for lunch and the others following on a little later after their lunch..

After Ellon, it was up to Auchnagatt on the railway line with a fairly smooth track and some great views over golden fields of Aberdeenshire.  Luckily the weather kept brightening up all along the way. 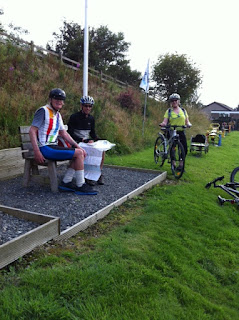 Just checking the map at an old station - they even had the Olympic flag out! 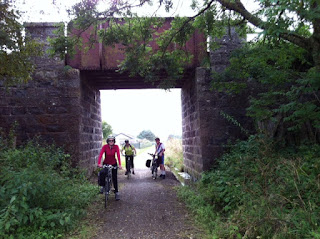 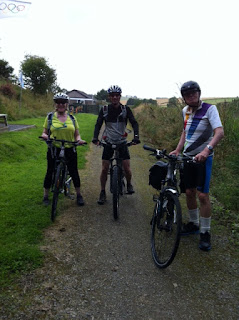 On the way again


At Auchnagatt, we left the railway line and headed over to New Deer where our two groups met up again one just finishing a lunch and the other ready for afternoon tea.  After excellent refreshments at New Deer, the final leg was to Turriff  on quiet country roads.

After an overnight stay in Turriff, it was back on the road again to head back to Aberdeen via Inverurie, and Dunecht.  It was another very unpromising start with major murk but ending up in brilliant sunshine. 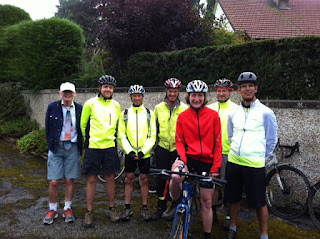 Team photo minus Liz and Judith

I can highly recommend exploring the Buchan Railway and the quieter roads round North Aberdeenshire.

Posted by Judith at 7:29 PM No comments:

A few snaps from yesterday's outing to do Angel's Ridge (the NE ridge of Sgor an Lochain Uaine). Weather cleared up a bit later than forecast but still a cracking day out in the heart of the Cairngorms. Biked to Derry Lodge, then a 27 km round trip from there. 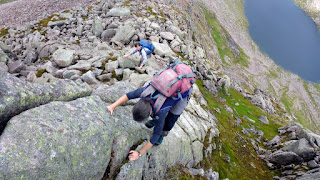 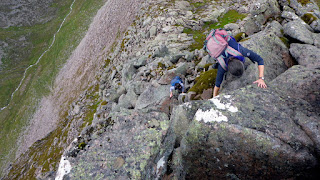