Back to Back Last Munros

The Whit holiday weekend brought not one but two last Munros for the AMC.
On Saturday Steve Wright finished on Sgurr a Bhealaich Dheirg, the middle of the “Three Brothers” in Kintail. The day started bright but the weather was on its way and Steve had to almost run the final few metres to beat the cloud to the summit. After a short celebration, which included the unique experience of Laphroaig-flavoured Prosecco, we headed over the most easterly Brother before descending to the Cluaine Inn for a well-earned pint. 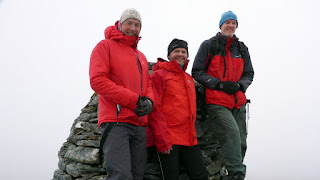 For some of us it was then a dash up to Kinlochewe for a pub rendezvous with Phil Hadland, an AMC member from way back in the last millennium. It was a bit like being at a wedding, with a handful of folks you know well but haven't seen for a while, and lots of people you've never met before. That was rectified a few pints later and we got an early night in preparation for Phil's 8am start.
Despite a foul forecast it wasn't too bad – windy enough but pretty much dry all the way to the top, where we were greeted by a snow shower. Much merriment ensued and most were slightly wobbly as we left the summit, which explains why we went the wrong way for a while. Error corrected we made a fast descent to get ready for the meal and ceilidh that Phil had very generously laid on for us in the village. Another fine night was had, although the quality of the dancing was a bit iffy...